Full beam ahead for vacuum prototypes

The 1-metre thick concrete slabs that make up the roof of the ESRF storage ring have been removed over a distance of 6 metres, laying bare the innards of Cell 14. The section has been cleared of all equipment ready to receive a particular configuration of elements, all prototypes for ESRF-EBS to be tested during the next run.

The set-up consists of three distinct parts. The prime element upstream the beam is a 2-metre dipole aluminium vacuum chamber, the first to be qualified for EBS. This chamber is joined to a shorter vacuum tube inside which prototype RF liners are to be tested with beam. These liners, which are present at the entry and exit of the chambers and resemble flexible blades, ensure good electrical conductivity between the chambers. The blades are 30 mm wide and made from copper-beryllium. In EBS they will be enhanced by gold plating to increase even further their conductivity.

“For EBS, the RF liners will be much closer to the beam than in the current machine so we are testing these pieces to see how they resist to heating, as well as testing their conductivity,” says Michael Hahn, head of the ESRF Vacuum Group.

In the same section, a prototype RF gate valve is also on trial. Gate valves are placed all around the storage ring. In the event the level of vacuum rises above a defined threshold upstream or downstream, the gates immediately close to seal the sections and minimise the loss of the ultra high vacuum through which the electron beam circulates. With vacuum levels close to those in outer space (10-9 of atmospheric pressure), and with roughly 900 metres of ultra-high vacuum to maintain in the accelerator complex, every centimetre counts. 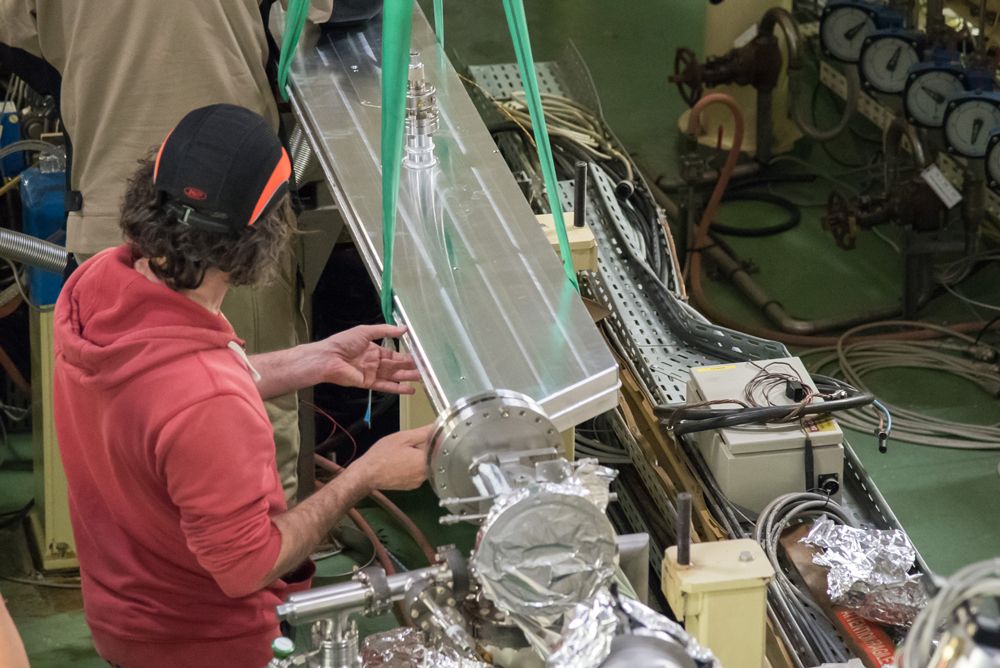 The dipole vacuum chamber is eased into position on Cell 14 during the March 2017 shutdown. ©ESRF/C. Argoud

“To reach the levels of vacuum necessary for the electron beam to circulate with no interference, the chambers need to be baked to a temperature of 150°C to release gas molecules trapped in the inner part of the vacuum vessels, and then pumped. This is a lengthy operation, for example it will take 2 days for the six metres of the prototype section in Cell 14 to reach the level required”, says Isabelle Leconte, engineer in charge of coordinating shutdown activities.

The gap of Cell 14 is completed with a 2 metre NEG-coated aluminium chamber which has been manufactured for the purposes of this prototype testing. It is also the first time it has been subjected to beam although full qualification was successfully sought inside the lab. This exercise will ascertain the absence of hydrocarbons inside the chamber and that there are no leaks or pollution.

Cell 14 was successfully tested with high intensity beam and in 16-bunch mode at the end of the March shutdown (30 March).