The EBS’s Extremely Brilliant beam is due to the new, compact arrangement of magnets in the storage ring. Over 1000 new magnets will be produced for the project over three years, representing a budget of more than €13 million.

There will be six different kinds of magnets, plus correctors, in the new EBS storage ring, all working in a specific way to guide the electrons around the storage ring in as compact and narrow a beam as possible, in order to deliver a highly brilliant X-ray beam to users.

Here’s a quick guide to each magnet in the EBS storage ring:

Dipole of the EBS storage ring
132 dipoles
Each dipole is an assembly of five permanent magnet modules made of low-carbon steel and pure iron poles. They are magnetized by samarium-cobalt blocks. Each magnet weighs 380 kg.
Unlike the other electromagnets, the dipoles don’t consume any power and don’t need water cooling.
The job of the dipoles is to bend the electron beam. Without dipoles, the electrons would travel in a straight direction!
The dipoles will be produced and assembled in-house, to take advantage of the in-house experience in permanent magnet assembly, measurements and tuning; and to provide full control over the assembly.
The final prototype will be finished in August 2016 and assembly will start in September
526 quadrupoles
There are two types of quadrupoles: 398 moderate-gradient quadrupoles and 130 high-gradient quadrupoles. High gradients in the centre of the arcs are needed to obtain a small beam, while a lower gradient outside allows to relax the specifications of the sextupoles.
heir job is to focus the beam. They act as magnetic lenses for electrons. The field of the quadrupole magnets varies linearly with the transverse position: the slope of the field is the gradient of the magnet.
The quadrupoles weigh from 300 kg up to 870 kg and each will consume between 0.7 kW and 1.6 kW of electrical power.
A solid iron prototype quadrupole was built and delivered in March 2015. Magnet expert Gael Le Bec and his team carried out magnetic measurements to check the tolerances, gradient, nominal current, etc in order to finalise the engineering design.
The quadrupoles will be delivered from autumn 2017 to spring 2018. 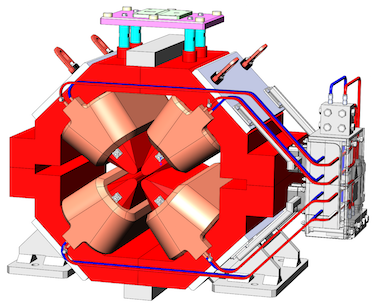 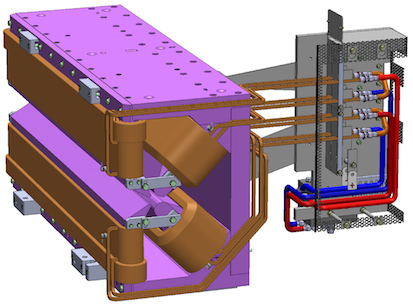 Dipole-quadrupole
99 dipole-quadrupoles
The dipole-quadrupoles bend the beam, as dipoles do, and focus the beam, as quadrupoles do.
The dipole-quadrupoles are single-sided magnets, with easy access on one side to install vacuum chambers and to measure the magnets. It also reduces the power consumption.
There are two types of dipole-quadrupoles: DQ1 and DQ2. They have different pole shapes that have been optimised in order to obtain a better field quality.
The design was optimized for reducing the machining costs so, instead of large solid iron blocks, the DQs will be manufactured with seven laminated iron plates.
The DQs will be delivered from autumn 2017 to the end of 2018.
196 sextupoles
The job of the 196 sextupoles is to control the chromaticity of the ring. The gradient of these magnets varies with the transverse position: particles with different energies see different gradients.
The design of the sextupoles has been simplified by removing a heavy aluminium frame.
They consume less electrical power than the quadrupoles, at around 0.5 kW.
Their nominal strength is 1750 T/m2 – the field gradient varies by 35 T/m each centimetre.
The sextupoles will be delivered from spring 2017 to spring 2018. 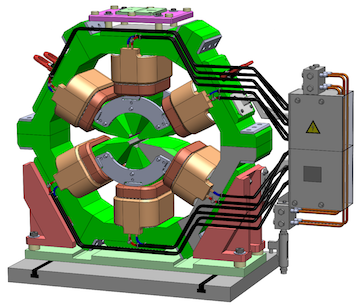 Sextupole of the EBS storage ring 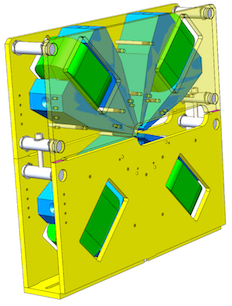 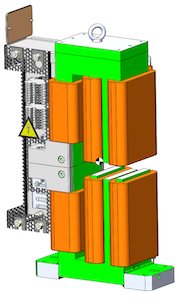 Corrector
66 octupoles
The octupoles are used for optimizing the non-linear dynamics.
A prototype has already been tested.
The nominal strength of the octupoles is 48 kT /m3.
100 correctors
The job of the correctors is to position the electrons on a correct orbit. They are also used to minimise the coupling between the horizontal and the vertical plane.
The correctors can generate normal and skew dipoles, and skew quadrupole.
They are shaped liked a ‘flat’ sextupole and are easy to install around the vacuum chambers.
They can steer the beam by 0.54 mrad horizontally and 0.67 mrad vertically.

Apart from the dipoles, which will be assembled at the ESRF by in-house experts, all magnets will be produced as a pre-series, in order to iron out any problems before launching into series production. The magnets will be measured and calibrated by the magnet suppliers using in-house designed stretched wire benches. They must then be aligned to within 50 microns RMS on girders, with the help of shims and wedges where needed, and finally, once all the other components are in place, they’ll be rolled into place in the EBS storage ring. 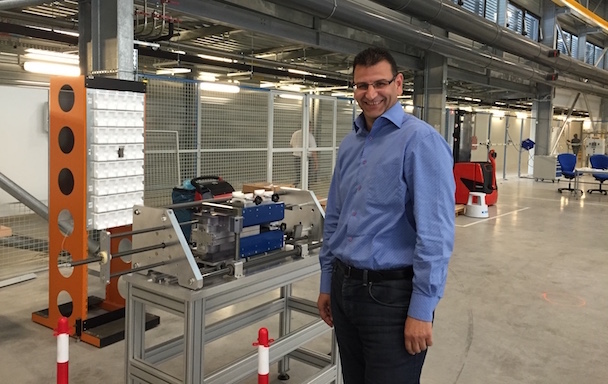 The magnet team is gearing up for their arrival. “Eight calls for tender went out from July to November 2015 for the magnets and today all contracts are in place,” says Chamseddine Benabderrahmane, magnet procurement coordinator (above, in the dipole assembly area).

During the next two years over 983 electromagnets will be delivered to the ESRF. 132 dipoles will be assembled in house using 6 tons of permanent magnets (more than 15000 blocks) and 660 module mechanical parts.
Previous article
Share this article
Next article