Musical chairs for the accelerator components

The ESRF-EBS project is starting to take shape. One of its challenges is how to manage the situation of musical chairs for this huge undertaking, as thousands of components are going to be shifted around in the coming years.

From the end of May onwards, the inside of the ring is set to undergo an earth-moving transformation, with 40 trucks per day removing a total of 6000 tonnes of earth in preparation for the construction of brand new EBS buildings.

EBS Installation Officer Pascal Renaud explains, “The existing ESRF accelerator components take up a space of over 2000m2 and they need to be kept onsite for radioprotection measurements after they come out of the ring. The new components for the Extremely Brilliant Source, once delivered, will take up a space of nearly 2300m2. At one point there will be two accelerators onsite! We need somewhere to store all this equipment.”

Luckily, with a total onsite surface of over 260,000m2 or 25 hectares, there is plenty of space to host the new buildings and storage areas that will sprout up like mushrooms over the next two years. 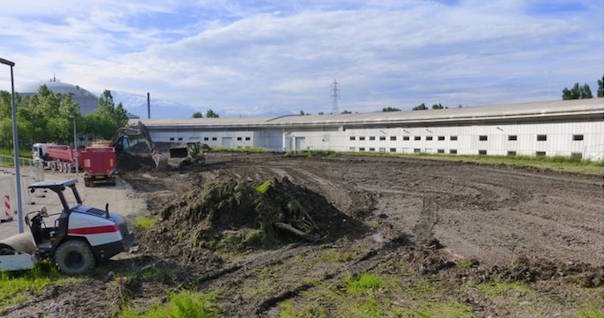 There’ll be one permanent building, at least three temporary buildings, and a platform is being prepared for shipping containers or another temporary building to be placed, depending how space requirements evolve,” says Thierry Marchial, who is responsible for buildings and infrastructure for the EBS project.

Designed by Assa Architects, the new structures will consist of one 1000m2 permanent building, named ESRF 1, and a 1000m2 temporary building in two parts, ESRF 2A and ESRF 2B, as well as a loading/unloading zone, located between MTBF and MTBD.

Architects’ impression of the new ESRF 1 and ESRF 2 buildings

Once the EBS components start arriving on site, they’ll first be stored in ESRF 2A and 2B. When needed for assembly on the 128 girders of the future storage ring, they’ll be taken to ESRF 1, which will be used as the assembly building.

The assembled girders will then be stored in the Chartreuse Hall until the storage ring tunnel is emptied and the installation phase commences, in spring 2019. This will leave ESRF 1 free to store equipment removed from the existing storage ring. Equipped with standard heating, lighting, ventilation and electricity, ESRF 1 will later be suitable as a radioprotection measurement building.

With components arriving in early 2017 and the start of the assembly phase in October 2017, the buildings need to be ready as soon as possible, yet heavy digging work needs to coincide with accelerator shutdowns, so that vibrations from the machines don’t disturb the beam on user experiments.

“The schedule is tight but we are on course to complete the buildings in May 2017 (ESRF 2) and September 2017 (ESRF 1), as planned,” Thierry states. With construction starting in August 2016, the first contractors must now hit the ground running, with just six days to remove more than 2300m3 of earth.