A brilliant new light shines in Grenoble, France, with the opening of the ESRF-Extremely Brilliant Source (ESRF-EBS), the first-of-a-kind fourth-generation high-energy synchrotron. After a 20-month shutdown, scientific users are back at the ESRF to carry out experiments with the new EBS source.

The ring-shaped machine, 844 metres in circumference, generates X-ray beams 100 times brighter than its predecessor’s, and 10 trillion times brighter than medical X-rays. This intense X-ray beam hails a new era for science to understand the complexity of materials and living matter at the nanometric level.

ESRF-EBS will contribute to tackling global challenges in key areas such as health, environment, energy and new industrial materials, and to unveiling hidden secrets of our natural and cultural heritage through the non-destructive investigation of precious artefacts and palaeontological treasures.

A shining example of international cooperation, EBS has been funded by 22 countries joining forces to construct this innovative and world-unique research infrastructure with an investment of 150 million euros over 2015-2022, lighting the way for more than a dozen projects worldwide, including in the United States and Japan.

“The opening of the first high-energy fourth-generation synchrotron to users is a landmark for the whole X-ray science community. We are all thrilled to envisage the revolutionary science to be carried out and  the new applications that will start to emerge. All ESRF staff should be commended for such an achievement, attained on time and on budget in spite of the current circumstances,” said Miguel Ángel Garcia Aranda, chair of the ESRF council.

“The novel accelerator technology of the ESRF-EBS opens the door to revolutionary new insights into the molecular machinery of complex materials and biological systems. This is the new tool for the design of future technologies and better drugs and thus of highest relevance for the future of the European society,” added Helmut Dosch, Vice-Chair of the ESRF council.

“This is a moment of pride for the whole of the synchrotron community,” said Francesco Sette, Director-General of the ESRF. “With the opening of this brand-new generation of high-energy synchrotron, the ESRF continues its pioneering role to provide an unprecedented new tool for scientists to push the frontiers of science and address vital challenges facing our society today, such as health, and the environment. “ 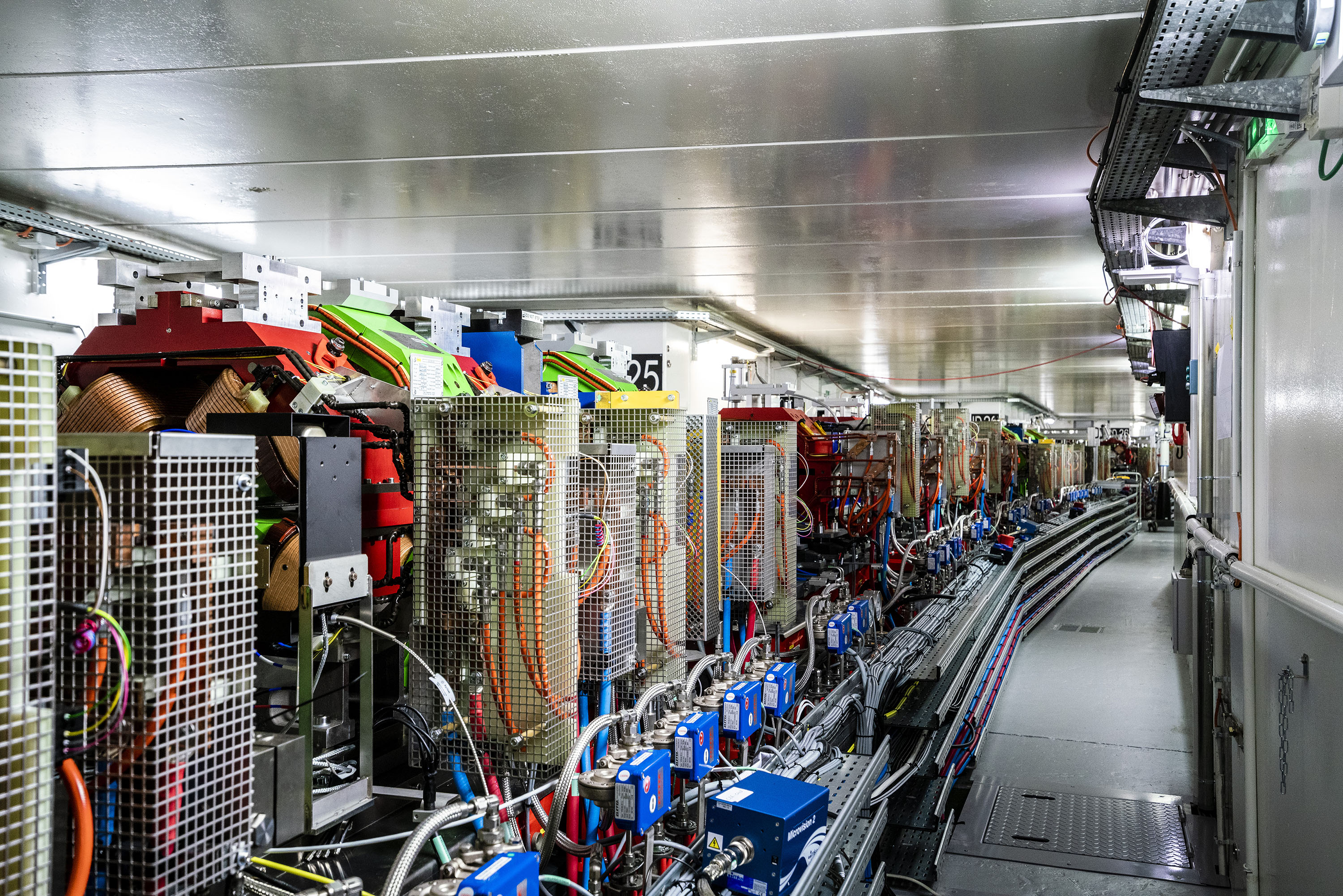 Imagine being able to perform a 3D scan of a full human organ or an entire body at micrometre resolution to better understand the process of infection, such as in diseases like COVID-19. Or the ability to map the human brain at the synapse level, with important implications for neuro-degenerative disease and emerging artificial neural network architecture-based technologies. How about tracking the presence in soil of nanoparticles from our everyday products at doses that were, until now, undetectable, to better evaluate their potential toxicity for the environment? Or even following lithium atoms during battery cycling for more efficient charging? Or performing a virtual autopsy of a mummy in its sarcophagus down to the cellular level? Or 3D scanning a T. rex skull down to the growth lines of the teeth?

With performances increased by a factor 100, ESRF-EBS, the first fourth-generation high-energy synchrotron, will enable the 3D exploration of matter from metre to nanometre scales, and thus aid scientists to better understand the complexity of living and condensed matter.

Since April, researchers have already used the intense EBS beam to study SARS-CoV-2, the virus responsible for the COVID-19 pandemic, and the disease’s impact on human organs.

A new generation of high-energy synchrotron

“A dream machine has come to life and now delivers ultra-small X-ray beams to push forward synchrotron-based research. I am excited to see the science that will result!” said Pantaleo Raimondi, Director of the Accelerator & Source division at the ESRF and inventor of the ESRF-EBS concept.

The new machine will circulate a ribbon-like electron beam 2 micrometres high and 20 micrometres wide, one-thirtieth as wide as the previous beam. To reach these performances, the ESRF has implemented a brand-new lattice, the Hybrid Multi-Bend Achromat (HMBA) lattice invented by Pantaleo Raimondi, based on a new arrangement of innovative magnets (over 1 000 magnets – nearly twice as many as in the previous storage ring – squeezed into the same 844-m accelerator tunnel). This new magnetic configuration will guide and focus the electrons in order to produce an X-ray beam 100 times more brilliant and coherent than before.

View of the X-ray beam before (top) and with EBS (bottom). ESRF.

The challenge: building a new generation of synchrotron within an existing infrastructure

“The body of the car remains the same, but we took out the old motor and put in the new engine of a Ferrari,” explains Pantaleo Raimondi.

On 10 December 2018, after 26 years of loyal service, one of the highest-performing X-ray sources in the world was shut down for 20 months. Teams took three months to dismantle the ESRF’s historic storage ring (disconnecting 200 km of cables and removing 1720 tonnes of equipment) and nine months to install the new machine in the 844-m-circumference tunnel, before carrying out the precise alignment of 10,000 innovative technological components to a relative accuracy of less than 50 microns – around half the width of a human hair – over kilometre distances.

On 28 November 2019, electrons were injected into the new EBS storage ring for the first time. Commissioning followed and, by 14 March, just before the site closed due to the COVID-19 pandemic, the machine operation parameters necessary to open EBS were reached, five months ahead of schedule.

A bright example of international cooperation

More than ever, science needs to be international and global to tackle the complex challenges facing our society. Since its inception in 1988, the ESRF has driven synchrotron science worldwide. Nations from Europe, and then from other parts of the world, decided to share the dream of creating unique opportunities for new knowledge at the service of the whole scientific community, and thus humanity. Driven by scientific and technological excellence, ready to take and share the risk of the unknown, recognising the value of international cooperation beyond discipline, gender, language and culture, the ESRF partner countries – with the successful within-budget and on-time realisation of the EBS programme – have set a new standard in international collaboration. ESRF-EBS is indeed lighting the way for more than a dozen projects worldwide, including in the United States, and Japan.