When Cristina Gonzalez Torres arrived at the ESRF in February 2019 as the newest member of the ESRF’s survey and alignment team, she couldn’t understand why she’d been given knee-pads. “Now I know!” she says, crawling on the storage ring tunnel floor to align a particularly hard-to-access component. 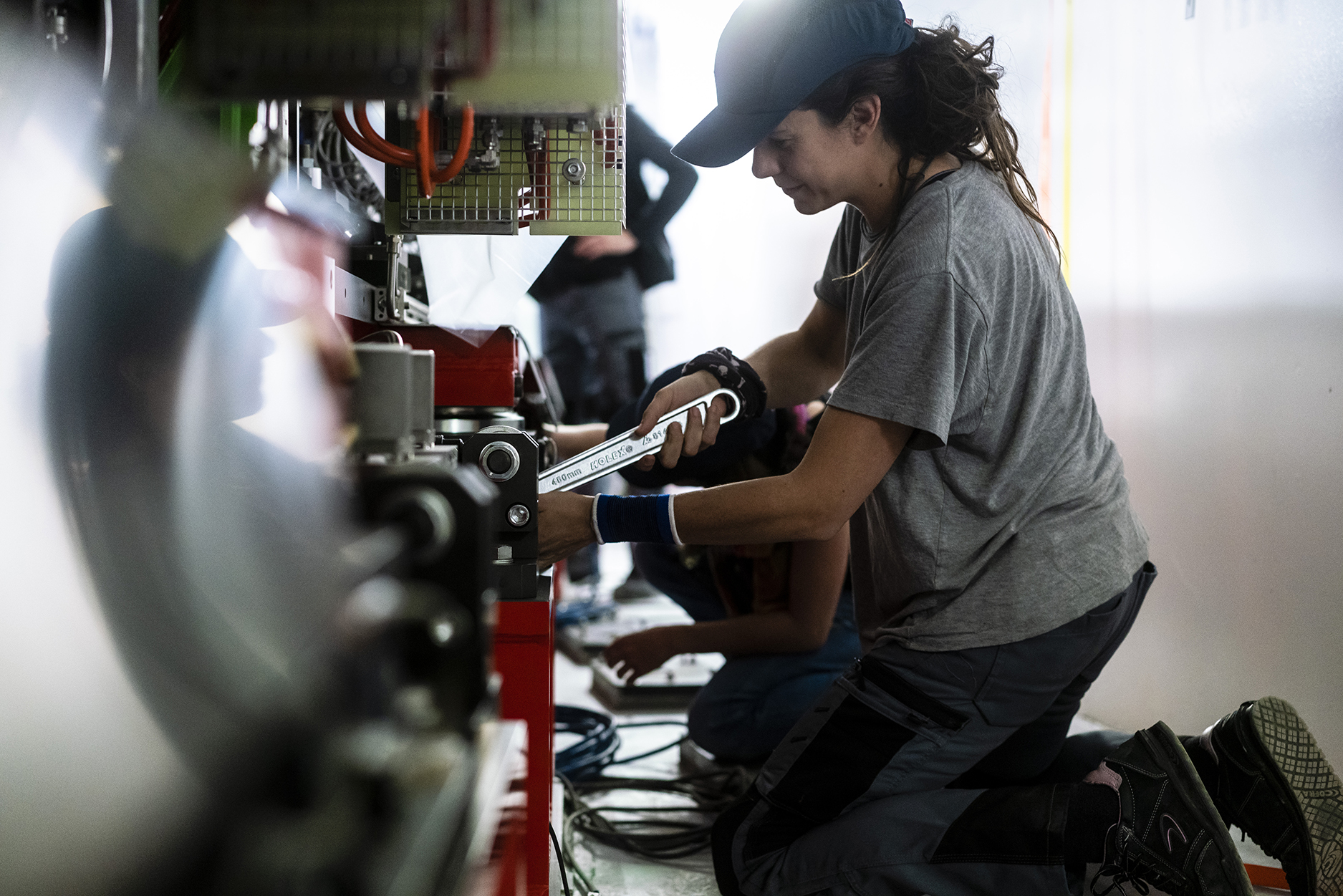 Gonzalez Torres is part of the team that ensures that each of the 10,000 components for the ESRF’s Extremely Brilliant Source (EBS) upgrade is precision-aligned to within 50 µm, over a distance of almost 1 km. The work is physically and intellectually demanding, requiring the operation of ultra-high-precision instrumentation in the tunnel. The pressure is high: successful operation of the new source ultimately depends on the accurate alignment of each element, but the dynamic team, which includes several new young recruits, brings a good-natured energy to the challenge.

“Survey engineers usually work in civil engineering so working at a synchrotron is new to me,” says Gonzalez Torres, previously a survey manager at technically innovative renewable energy plants in Spain, Chile and the USA. “But this is a unique project in the world – of course I wanted a chance to work on it!” 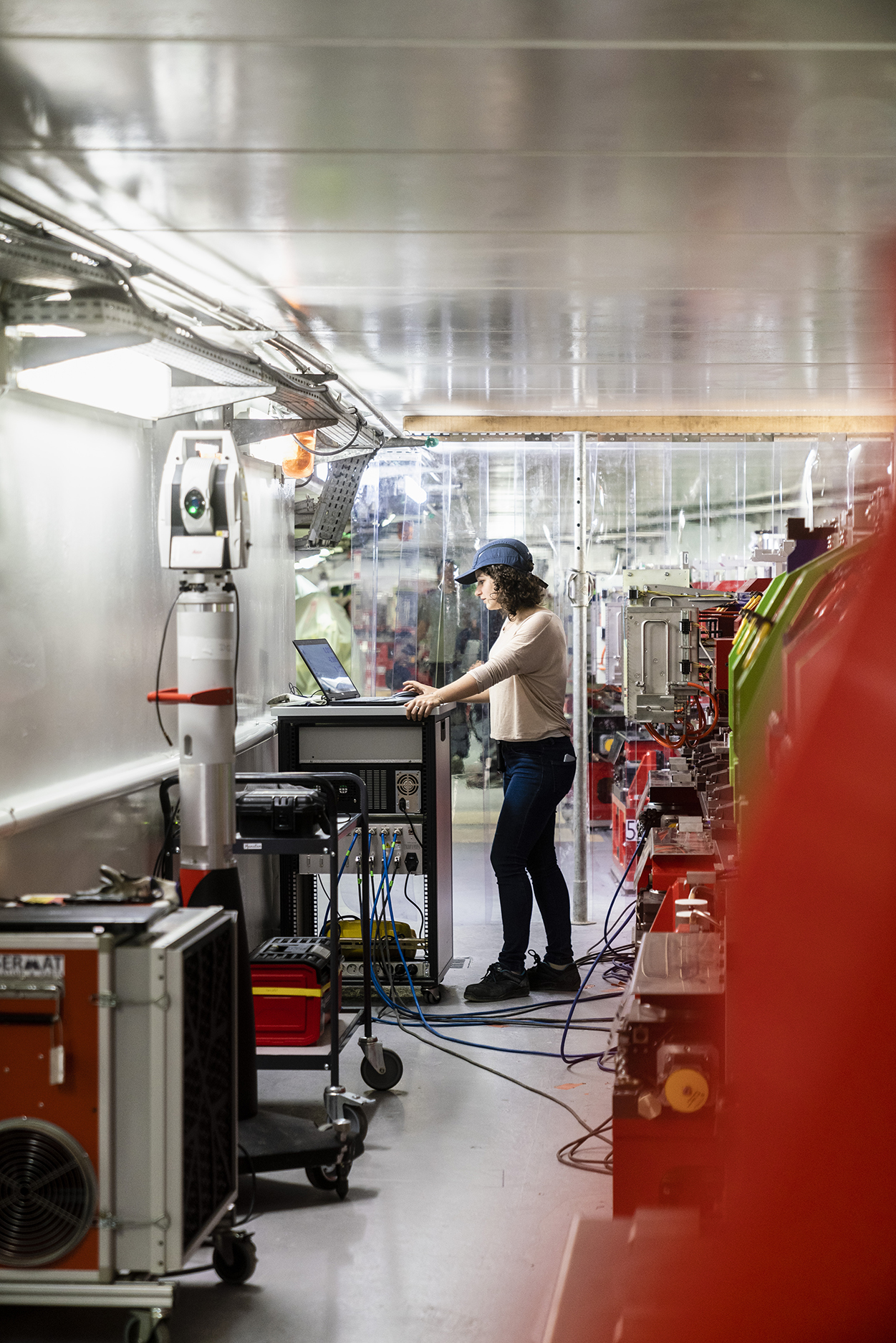 Her colleague, metrology engineer Juliette Autin, agrees. “It is unusual to work on such a large-scale project,” she says. Autin joined the ESRF in March 2018 after three years in public building and infrastructure and her role includes planning and organisation as well as the alignment of the girders, front ends and beamlines. “Even in the world of accelerators, the chance to be involved in the construction of a new machine is a once-in-a lifetime experience!”

The distinctive experience of EBS is indeed proving rewarding for the young engineers. “EBS brings together all the aspects that I sought when entering the field of metrology: plenty of field work, being part of a team and a wide scope of tasks,” says Marie Spitoni, who arrived less than a year ago following a PhD in fluvial geomorphology. Spitoni’s work includes anticipating future deformations of the storage ring linked to the geological environment of the ESRF. “I also like having to work with the constraint of extremely low tolerances on our measurements and at the ESRF everything is very precision-sensitive,” she adds. 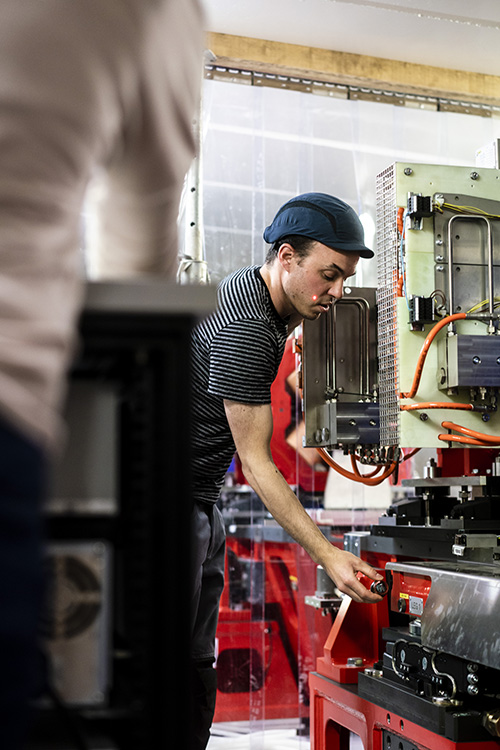 It’s a sentiment echoed by the rest of the team. “In other fields of survey and alignment we rarely need to push the equipment to its limits but here we are exploiting top-standard instruments to their full potential and that’s exciting,” adds Guillaume Chamblas, a metrology engineer who arrived in November 2017 from CERN to work on the complex alignment calculations. 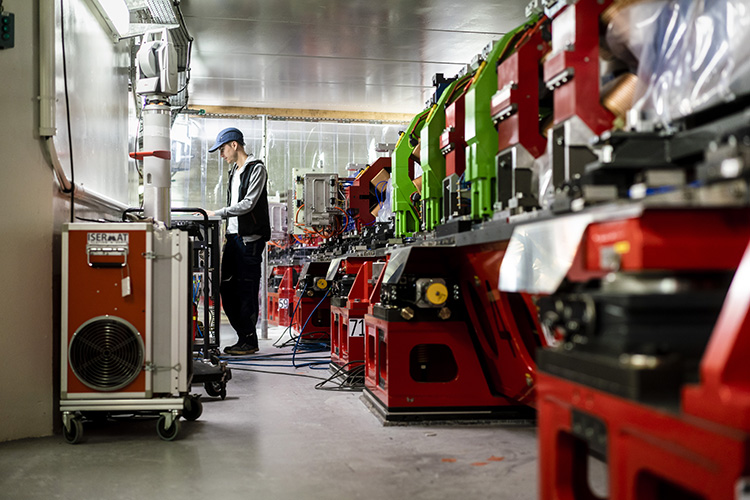 As well as the excitement of today’s challenges, the team recognises the experience is invaluable for the future. Survey and alignment technician Emmanuel Alcouffe joined the group permanently in October 2016 and appreciates the knowledge that working on EBS gives him for his job in the long term. “We are learning to understand each component and how it behaves, which will be very useful for when we have to align the machine in the future,” he explains.

All appreciate the constructive, problem-solving atmosphere and the chance to benefit from the expertise of the long-serving members of the group, some of whom have worked at the ESRF for nearly 30 years.

As this team neatly demonstrates, if EBS is possible thanks to the skill and dedication of its established experts, it also provides an important opportunity to pass valuable experience and essential knowledge to the next generation of brilliant scientist, engineers and technicians, ensuring the ESRF remains in expert hands for decades to come.