The ESRF-EBS project is in full swing. The first EBS girders have been fully assembled with magnets, supports and vacuum chambers and transported to the Chartreuse Hall.

Hoisting 13 tons of girder – with state-of-the-art components aligned to within 50 microns – onto a lorry to be transported into safe storage is no mean feat in any weather. However, on a rainy Friday morning in February, the EBS project team braved the elements to transport the first fully assembled girders from dedicated assembly building ESRF 01 to the Chartreuse Hall, where they will be stored until the start of the installation phase in early 2019.

Girders and mock up in the Hall Chartreuse. Credits: ESRF/C.Argoud

A specially designed motorised girder transport module is used to convey the girder from the assembly building to a lifting stage, where it is attached to a 40-ton crane, raised three metres into the air and placed on the back of a heavy goods lorry, before being driven to the Chartreuse Hall and unloaded.

It is a precise and painstaking operation that has been the subject of several studies into the effect on the alignment of nearly 80 individual assembled components. “We’ve seen that moving the girders in this way does not disrupt the components more than a twentieth of a millimetre,’’ explains installation engineer Pascal Renaud. “On our current schedule, we plan to move around three girders each week.” 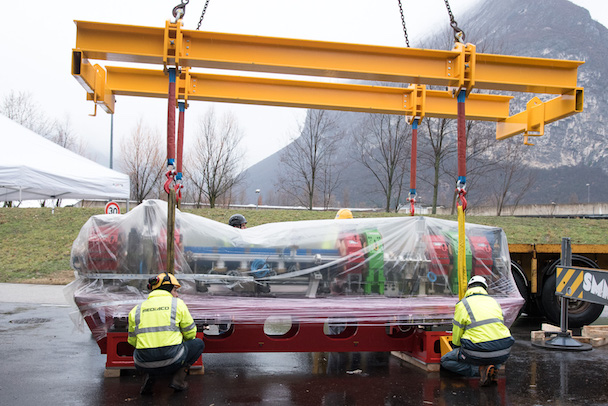 Transfer of the 1st assembled girders from ESRF01 to the Hall Chartreuse. Credits: ESRF/C.Argoud
Previous article
Share this article
Next article