Italian and French Ministers at ESRF for an ESRF-INFN agreement

Francesco Sette, Director General, ESRF (European Synchrotron Radiation Facility), Bertrand Girard, Chairman of the Council of the ESRF, and Fernando Ferroni, President of INFN (Istituto Nazionale di Fisica Nucleare), signed, on Monday 8 February 2016, a collaboration agreement in the presence of the Italian and French Ministers, Stefania Giannini, Minister for Education, Universities and Research, and Thierry Mandon, Minister of State for Higher Education and Research. This agreement represents a decisive milestone for the ESRF-EBS (Extremely Brilliant Source) project, which will create a new generation of synchrotrons with performances that are unique in the world.

The Ministers chaired the signing ceremony of the collaboration agreement between ESRF and INFN, following the visit of the ESRF new Experimental Hall and the presentation of examples of the international research carried out at the ESRF in areas such as structural biology and medical research to conceive new drugs, materials science to understand the geodynamics of our planet, soft matter to understand the functioning of muscles, archaeology to unveil non-destructively mysteries of ancient artefacts, environmental sciences and nanotechnology. 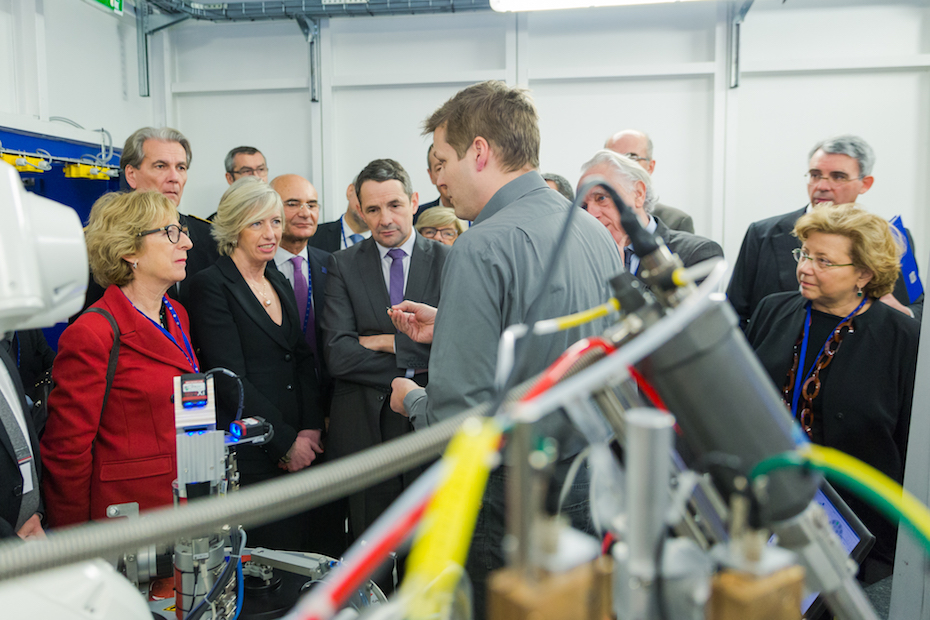 The ministerial delegation visiting one of the structural biology beamlines in the new ESRF Experimental Hall. Credit: ESRF/P. Jayet

This agreement reinforces the links between ESRF and INFN, which date back to the very beginning of the ESRF, and to the design of the existing machine. Since 2011, collaboration between ESRF and INFN-LNF (Laboratori Nazionali di Frascati) has further strengthened with the conception and engineering design of the new revolutionary ESRF-EBS storage ring. INFN, with its pioneering work on DAFNE (the first accelerator made almost entirely with aluminium vacuum chambers), has helped in all aspects of the design and construction of the ESRF-EBS vacuum system.

The ESRF-EBS is a major challenge requiring state-of-the-art accelerator technology to realise a very innovative relativistic electron beam dynamics design. This unique project is supported by the 21 partner nations of the ESRF, including France, the host-country, and Italy whose contributions to the ESRF amounts to 27.5% and 13.2% respectively. The principal aim of this project is to construct and commission the new 844 m circumference ESRF-EBS storage ring, over the period 2015-2022. About 90% of the existing infrastructure will be re-used, and the new ESRF-EBS design has been conceived with greatly improved energy efficiency providing a 20% reduction of electricity costs. Consequently, also thanks to expertise of ESRF staff and the network between European accelerator laboratories, the construction and operation of the ESRF-EBS is very attractive from many points of view: science, technology, education of young generations in challenging jobs and financial costs.

This agreement strengthens the partnership between ESRF and INFN, a collaboration which is going since many years, and will be of great importance at a time in which ESRF and its European partners work together to invent and construct the new ESRF-EBS storage ring. The ESRF-EBS programme is a great technological challenge, and its realisation needs the support and input from the outstanding European accelerator community, among which the INFN with its physicists and engineers from the INFN-LNF in Frascati. The ESRF-EBS, delivering a conceptually new and first-of-a-kind storage ring, with performances multiplied by 100 in terms of brilliance and coherence, will provide synchrotron scientists with a new generation of extremely high brilliance X-ray beams for the exploration of matter, the understanding of life at the macromolecular level, and the excellence and advancement of European and world science. »
Francesco Sette underlined that.

This agreement represents a key step in the construction and installation phases of the ESRF-EBS new storage ring. It will result in an exchange of expertise and a strengthening of technical assistance between ESRF and INFN.

The collaboration between the ESRF and the INFN is very important. The INFN, with its excellence in the design, development and use of its own accelerators for fundamental research, is very attentive to make available its expertise and technology to all undertakings in which the accelerators are used for Science in general, and for applications to the benefit of our society.
Fernando Ferroni

Pantaleo Raimondi, Director of the accelerator Division, presenting the new girder and quadrupole prototypes
This parnership between the ESRF and the INFN is a historical one, because it is at the heart of immense scientific progress. It is the illustration of the famous 1+1=3. Creation of new strengths, new summits, new lights. By building new knowledge, by probing and advancing towards unknown territories, researchers play an essential role. They make the world less gloomy, less obscure, less blurry, less dark. They make the world brighter!
As underlined by Minister Thierry Mandon
The collaboration agreement signed today testifies of the primary role played by Italy in important European research infrastructures, like the ESRF, which develops an outstanding scientific activity in many different domains: from cultural heritage to nanotechnologies, from environment to the study of new drugs
Affirms Minister Stefania Giannini
Essential, in this regard, is the scientific know-how provided by the INFN. Italy, together with France and Germany, is among the main contributors to the ESRF, a model of international cooperation, which welcomes every year thousands of scientists. An example of the Europe that we like.
Concludes Stefania Giannini
Previous article
Share this article
Next article