On a cold but sunny December morning, the prototype girder for the ESRF’s EBS project (see Good Vibrations article) was put through a series of impressive motion tests to check the alignment of the attached dummy magnets. The results are now in and things look promising for the final transport of the girders!

It’s planned to pre-assemble and align the 128 girders with the magnets in advance before installing them in the 32 cells of the storage ring tunnel, both to gain time and because of the limited space available to work in the tunnel.

However, this creates a great challenge: loading the 7-tonne girders and precisely aligned magnets onto a transport device and driving them from the assembly area (a new building, called B1, in the middle of the ESRF site) to the storage ring, where they will be lifted over the tunnel wall, transported to their final place and finally unloaded. Also, since the first girders will be assembled before the tunnel is ready for their installation, they will be stored intermediately in the Chartreuse Hall – adding a further loading, trip and unloading.

To complicate things further, the magnets can only tolerate a movement of 50 microns in any direction – that’s smaller than the thickness of a piece of paper!

One of the key questions for the EBS project was therefore whether the girder could be transported without disturbing the alignment of the magnets. The only way to find out was to test it!

Three movement tests were devised for the prototype girder, with the alignment of the magnets checked before and after each test. The measuring equipment is accurate to within 10 microns –about as long as a human red blood cell.

Christophe Lefevre from the Alignment group took the measurements. “We use an AT401 laser tracker to measure the relative positions of the magnets with respect to one another,” he explains. “Because the girder cannot be repositioned in exactly the same place as it was at the origin, we make a 3D transformation to analyse any magnet movement.”

Three of the magnets on the girder were also equipped with 3D accelerometers – one on each end magnet (QF8, left and SD, right) and one on the middle magnet (QF6). These were carefully monitored by Marc Lesourd from the ISDD’s Mechanical Engineering group. “The accelerometers measure the vibrations of the girder,” he explained. “If the magnets do move, we can see the vibration levels at which they started moving in order to impose an acceleration limit and put it in the specifications for the future transporter.”

The first test consisted of the girder being lifted half a metre in the air by a large system of jacks and lowered back into place. Alignment tests performed once it had been put back in position showed that no significant movement of the magnets was observed!

For the second test, the girder was lifted, displaced sideways and lowered onto new feet attached to rollers. Next, a remote controlled hydraulic motor was used to drive the girder a few tens of metres in the Chartreuse Hall, including over a 3mm iron sheet to check for shocks that could be caused by joins in flooring or small steps. Again, alignment tests showed that no significant magnet movement was detected. 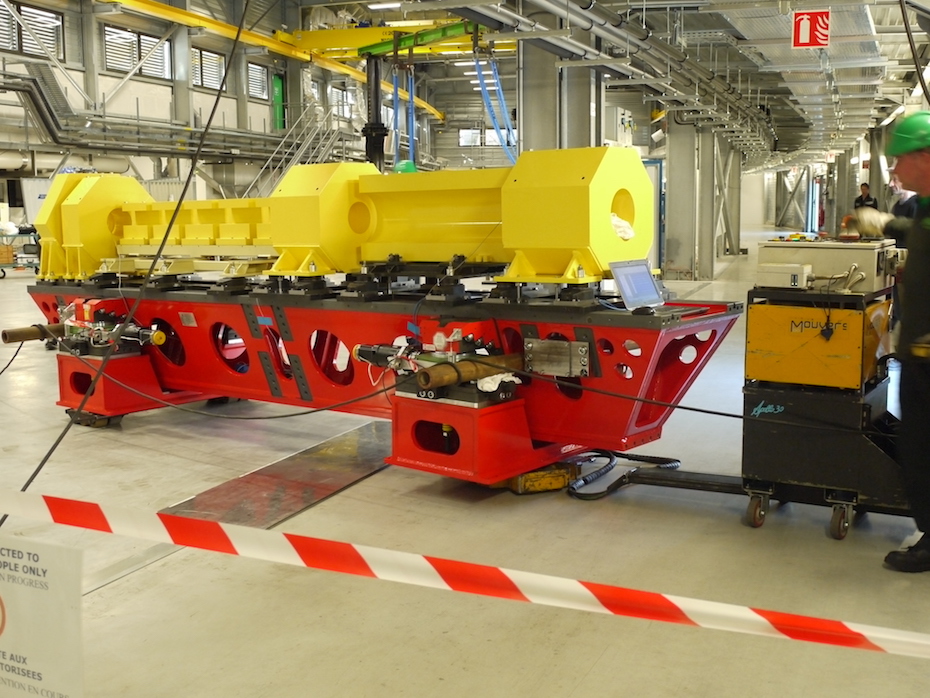 Finally, the girder was driven outside the Chartreuse Hall, lifted several metres in the air by a crane and placed onto the back of a truck. It was then driven around the exterior of the storage ring at a maximum of 30km/h.

The girder and magnets take a road trip around the ESRF site! 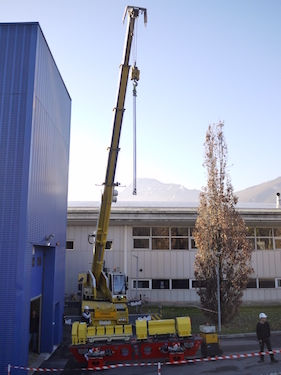 Road Trip for the girder 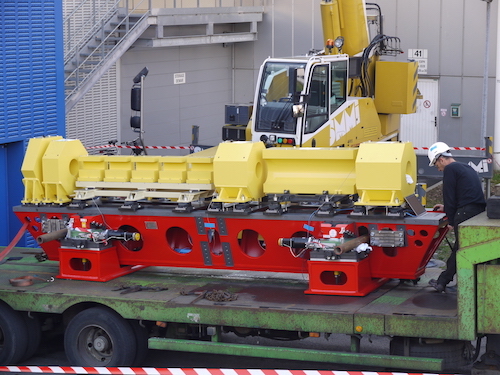 “Throughout these tests, the peak-to-peak acceleration never exceeded 1.5g,” reports Marc Lesourd. “A maximum value of 1.4g was recorded on the QF8 magnet in the vertical direction during truck movement. Other movements yielded levels below 1g and results from the alignment measurements show no major deterioration of the alignment with these acceleration levels.” The maximum allowed acceleration will therefore be capped at 3g when the girders are finally transported into the ring.

The alignment results were also very pleasing! “Even taking into account maximum measurement errors, we got a total magnet movement of 44 microns, which is still below the 50-micron limit,” explains Head of Alignment David Martin. “Although these tests do not validate future transportation systems, we can safely say that assembling the girders in the B1 building and transporting them with the same care observed in these tests will cause no significant deterioration in the overall alignment.”

The tests raised other issues that the team will now investigate, including the use of pneumatic wheels to absorb shock and to distribute the girder weight over a larger surface area in order to protect the ESRF roads.