The construction and delivery of the EBS magnets is complete, marking a major milestone four years into the project.

Over 1000 new magnets have been produced for the innovative new storage ring, which will be transformed from the old double-bend lattice design to a brand new hybrid multibend achromat (HMBA) with seven bending magnets per cell.

The revolutionary new design, which will deliver an X-ray beam 100 times more brilliant and coherent than before, requires squeezing twice as many magnets into the existing space as compared with the old machine, so many magnets have had to be redesigned to be more compact and to generate stronger magnetic fields.

Many of the magnets push engineering technology to the limits, taking advantage of today’s better materials and increased expertise.

The dipoles are made from ultra-stable permanent magnets instead of electromagnets and were constructed in-house over the course of a year by the ESRF’s team of magnet experts. They will not use any electricity, compared to the 700kW used by the old dipoles.
The sextupoles are four times more efficient than the previous ones thanks to a small gap and an optimised design, so they take up very little precious space in the storage ring.
The dipoles are combined with quadrupole components to be able to simultaneously bend and focus the electron beam.
The octupoles have only four coils instead of eight (thanks to a clever design!), leaving the required space for the beam to pass through. 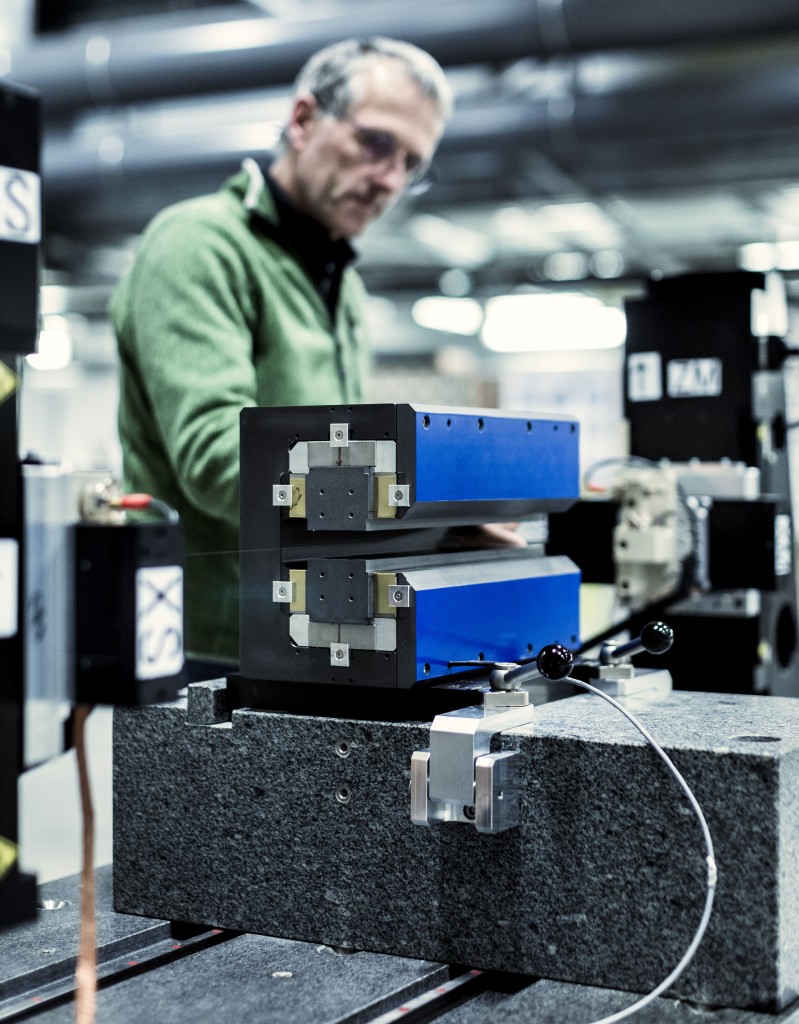 The dipoles for the EBS storage ring were assembled in-house by ESRF staff, supervised by Insertion Devices and Magnets group head Joel Chavanne (above), and required the installation of over 15 000 permanent magnet bars into 650 magnet modules to produce the 128 finished dipoles. Credit: S. Cande/ESRF

ASD director and EBS project leader Pantaleo Raimondi said, ”When you think of a synchrotron, the magnets are often the first components that come to mind. The magnets of the EBS project stand out in terms of innovation, from the combined function dipole-quadrupoles to the permanent magnet dipoles or high gradient quadrupoles. This reflects the capacity of the ESRF team to move forward in magnet technology.”

''It has been five years of work and we are very pleased to have reached this point.''
Head of Insertion Devices and Magnets group, Joel Chavanne

Once cell of the EBS's HMBA lattice, with all the magnets supported on four girders. Shown are four dipoles (blue) and three dipole-quadrupoles (pink), making seven bending magnets in total, as well as the quadrupoles (red) and sextupoles (green).

With the magnets ready, the next important steps of the project approach. On 10th December 2018, the last beam of the old machine will fade away and teams will have 18 months to dismantle the existing accelerator and install and commission the new magnet lattice, before bringing the new Extremely Brilliant Source online in September 2020.